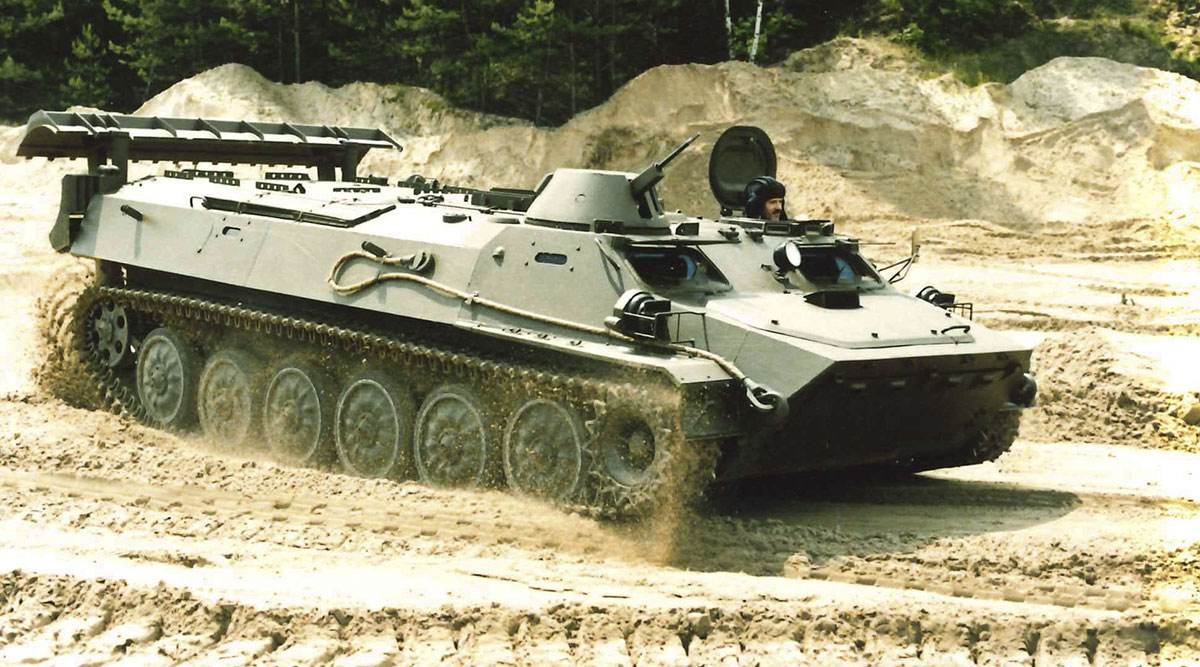 The Southern Works were re-opened on 5th January 1945.
On 1st April 1945, the infrastructure complex around the Southern Works together with Stalowa Wola housing estate was granted town privileges.
The subsequent 5 years were a period of undertaking tasks not related to special production, since after years of war, the army was not interested in expanding its defence potential.

On 20th March 1948, on the tenth anniversary of its establishment, upon request of the employees, the Southern Works acquired a new name – Huta Stalowa Wola.
In 1950s, special production – artillery equipment on the licence of the then USSR – was started. In 1950, the current 6th Regional Military Representation started to operate in HSW. Anti-aircraft guns, tank guns, towed guns and artillery tractors were the key products manufactured by HSW in the 1950s and 1960s, destined mostly for exports to the Eastern markets. Production of D-10 guns for the T-54/55 tanks, the most popular tanks in the world after the II world war, which started in 1957 deserves particular attention in this context. The tanks were manufactured in Poland and – equipped with complete guns or barrels from HSW – were sold on foreign markets, thus creating demand for spare parts. Subsequent versions of D-10 remained in HSW’s portfolio until the turn of the 1980s and 1990s.
Development of HSW went hand in hand with the development of the town of Stalowa Wola. Urban infrastructure was developing dynamically and extensively in particular in the 1950s.

The 1960s and 1970s marked the beginning of production and sales, also for exports, of maritime rocket launchers to be mounted on-board of amphibious assault ships. It was a milestone in the history of HSW, the first step of the Company towards its presence in the area of rocket artillery and navy. A light towed launcher followed the maritime launcher.
In connection with preparations to production of an infantry fighting vehicle, HSW acquired valuable experience and infrastructure facilities: a new production division (1969). Due to decisions concerning special production taken at national level, these activities did not lead to commencement of production, however the knowledge and skills base worked out then remained forever. The division became a place for development of a new production branch of HSW – since 1997 it has been manufacturing construction machinery. It was another milestone in the history of HSW; commencement of activity in this area meant that together with licensing documentation for American construction machinery, Western technologies entered the Company, naturally eliminating the ones stemming from the Soviet defence industry.

In 1972, the Industrial Integrated Plant Huta Stalowa Wola was created, and HSW received the status of supreme unit therein.

Since the licence for multi-purpose light-armoured tracked towing vehicle MTLB was implemented and its serial production started in 1976, in total 6500 of these vehicles have been exported to the USSR. After 1980, many vehicles based on its construction were created in HSW: the multi-purpose tracked transporter Piast, automated air defence command vehicle ‎‎Łowcza, medical evacuation vehicle Lotos, engineering transporter Durian. As many others, not listed here, they did not reach the phase of serial production, yet they constituted priceless expertise base for projects carried out later. Two variants of the amphibious chassis Opal were constructed on the basis of modifications of MTBL. These in turn were used in subsequent constructions: engineering reconnaissance vehicles Hors, technical suport vehicles Mors, scattered mine laying vehicles Kroton.
Around the same time, HSW obtained licensing documentation for self-propelled howitzer calibre 122 mm Goździk (1976) and its serial production (1984-1991); approx. 73 of them were exported to the USSR, and 529 were manufactured for the national army. It was the last product in HSW based on Soviet license, and at the same time it constituted an important step for the Polish Army towards substitution of towed howitzers with self-propelled artillery.
Huge production scale and the fact that the whole potential of the existing division was used for civilian production were arguments in favour of developing the existing production infrastructure. In 1979, a production facility, built and furbished at a stunning pace, was handed over for use; it constituted infrastructural base for HSW’s special production (so called Z-5).

The years 1989 and 1990 marked a breakthrough in the activities of HSW – after censorship was over, first attempts were made to “independently” enter the market with special production.

Due to new economic realia, time came to “free” HSW of activities not related to its production profile. In the conditions of market economy, it was no longer possible for HSW to remain the centre of all socio-economic activity undertaken in Stalowa Wola and the region. It was thanks to HSW that the region had for a long time enjoyed a hospital, clinics, a culture centre, employees’ hotels, bus depots with transport fleets, a stadium, holiday resorts, kindergartens, nurseries, and thousands of flats for employees had been built.
In 1991, the Industrial Integrated Plant Huta Stalowa Wola was transformed into a capital group and Huta Stalowa Wola became sole-shareholder company of the State Treasury. In the same year, HSW’s status of a defence company was revoked.

The years 1991-1997 were a period of deep restructuring of HSW and seeking a way to restructure the whole Polish defence sector, time of putting decision-making in defence projects on hold. In the period between dissolution of the Warsaw Pact (1st July 1991) and accession to NATO (12th March 1999) matters related to military armament were not priorities. Many product proposals put forward at that time by HSW were for various reasons not accepted; however, the experience gathered this way proved to be invaluable. In this context, i.a. the design of a hybrid rocket-artillery air-defence set Stalagmit/Sopel, which reached the stage of a prototype, was key. Worth emphasizing are both independent construction or modification of existing constructions, as well as the ability to integrate own solutions with products of other manufacturers, and performing the role of a leader coordinating complex defence and security projects.

The 1990s were for HSW a period of establishing cooperation with Western manufacturers of armament, and consequently of introducing new organizational as well as production standards. Cooperation was started with i.a. the Swiss company Mowag and Austrian Steyer (works on a wheeled armoured transporter), British BAE Systems (155 mm gun), Swiss Oerlikon (KDA autocannon). At that time, HSW was making first steps towards working out new quality of cooperation with the army, expressing its readiness to supply and take responsibility for operability of complex defence systems instead of single products or components.

In 2000, a separate organizational structure, focusing on special production, was separated from HSW S.A. – so called Military Production Centre.
After the “era” of MTBLs and Goździks for domestic army, in 2003 a long-awaited breakthrough took place – the M98 mortar was handed over to the army, designed from scratch by constructors from Stalowa Wola in cooperation with the final user. It was HSW’s first step on the path towards projects changing the face of the Polish artillery and missile troops, which we have been following until now. This and subsequent products of HSW may be found in the current portfolio “for defence and security”.