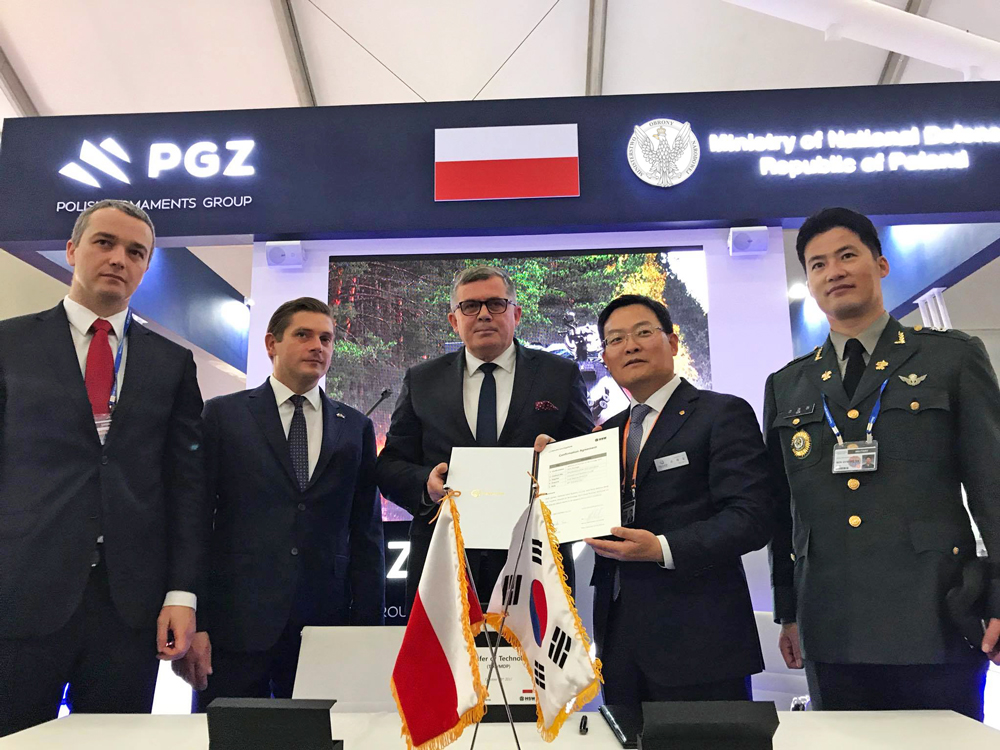 On Wednesday, 18th of October, at an international fair Seoul International Aerospace & Defence Exhibition ADEX 2017 an official inauguration of the technology transfer process took place between a Korean Hanhwa Land Systems and Huta Stalowa Wola S.A. Thanks to the initiated process the Polish company will be able to build crawler chassis for the ‘Regina’ program as well as other future projects.

The official beginning of the technology transfer was one of the main events of the second day of the fair ADEX 2017. Han Jae-Il, Hanwha Land Systems’ representative, signed the document confirming the obligations of both parties to fulfill the contractual obligations between Huta Stalowa Wola and Hanwha Land Systems for the chassis and component deliveries and technology transfer to HSW S.A. On the Polish side, the chairman of the board of Huta Stalowa Wola S.A. Bernard Cichocki and a member of the board and the director of the development of Huta Stalowa Wola S.A. Bartłomiej Zając have signed the agreement. The event was attended by the Secretary of State in the Ministry of National Defense Bartosz Kownacki and the President of the Board of the Polska Grupa Zbrojeniowa S.A. Błażej Wojnicz.

– Today’s ceremony is a very important event for the whole Group. We regain the competencies that our industry unfortunately has lost over the last few years. The transfer of technology for the construction of modern crawler chassis is a milestone in terms of rebuilding the potential of the Polish defense industry for modern land platforms. The cooperation we have established with the Korean defense industry is yet another step towards increasing our autonomy on Poland’s key security fields. – said the Secretary of State in Ministry of National Defence Bartosz Kownacki.

Contract with the Korean company Samsung Techwin (now Hanwha Land Systems) Huta Stalowa Wola S.A. concluded in December 2014 in order to implement the REGINA program. In mid-December 2016, the Ministry of Defense’s Armaments Inspector ordered 4 division fire modules “Regina” worth 4.5 billion PLN, which is the largest contract in the history of the Polish defense industry.

The purchase of a license and the technology transfer connected with it are very complicated processes both technically and in terms of business and trade. Successful finalization of these efforts will, however, increase the quality of PGZ’s offer and will significantly improve our ability to develop the most up-to-date crawler vehicles technology available on the market. – said the President of the board of Polska Grupa Zbrojeniowa S.A. Błażej Wojnicz.

Up to now, Hanhwa Land Systems has already delivered 24 chassis to Poland, which allowed the completion and delivery of the first Regina fire brigade for the Polish Armed Forces in late August. Another 12 chassis made in Changwon are currently waiting for shipment to Poland, where they will be completed by the crew of HSW S.A. The remaining 84 chassis will be fully assembled in the country as a part of technology transfer from Korea.

– Thanks to the know-how we will receive as part of the cooperation with Hanwha Land Systems, we will be able not only to quickly and efficiently execute orders for the Polish Armed Forces, but also to better develop new terrestrial platforms on heavy crawler chassis such as infantry fighting vehicles, self-propelled anti-aircraft systems, fire support vehicles or technical protection vehicles. The implementation of this program and its derivatives will allow for the further expansion of HSW as well as to maintain jobs and in the future may contribute to  the need to increase employment – said after the ceremony chairman of the board of directors Huta Stalowa Wola S.A., Bernard Cichocki.

In accordance with the agreement between HSW S.A. and Hanwha Land Systems the first stage of the technology transfer will be implementing the welded corps and chassis components for the second division fire module ‘Regina’ in the framework of the current contract which is to be delivered in mid-2019. Dates for the delivery of further fire modules depend on the progress of investment works currently being carried out on the site of the extension and modernization of the production infrastructure. In order to fully absorb and implement technology from Hanwha Land Systems HSW S.A. enlarges production halls and builds robotic welding. Under the agreement with a Korean partner, the company has the right to use the acquired technology to develop and produce new custom modifications and solutions.

Self-propelled howitzer 155mm ‘Krab’ is one of the most modern constructions of this type in the world. It is designed for the inactivation and destruction of: artillery batteries and rocket artillery, command posts, communications junctions and field reinforcements, sub-units of mechanized and motorized tanks in all positions and types of combat operations, armored measures vehicles in the depths of the enemy group and direct fire, helicopters on landings and logistics support facilities.

Between 17th and 22nd of October 2017 the largest armaments and defence industry exhibition event in Korea Seoul International Aerospace & Defence Exhibition takes place in Seoul. ADEX 2017 is an event happening every two years. In the previous edition of the fair in 2015 386 exhibitors from 32 countries have participated and the number of visitors has exceeded 100 thousand guests. PGZ Group together with Ministry of National Defence presents and offers a wide range of products on Asian market: artillery systems, wheeled armored vehicles, anti-aircraft defence systems, firearms, and a rich assortment of soldiers’ individual equipment. The actions of PGZ Group on ADEX 2017 fair are supported by the presence of the representatives of the government: Secretary of State in Ministry of National Defence Bartosz Kownacki and Undersecretary of State in Ministry of Foreign Affairs Marek Magierowski.