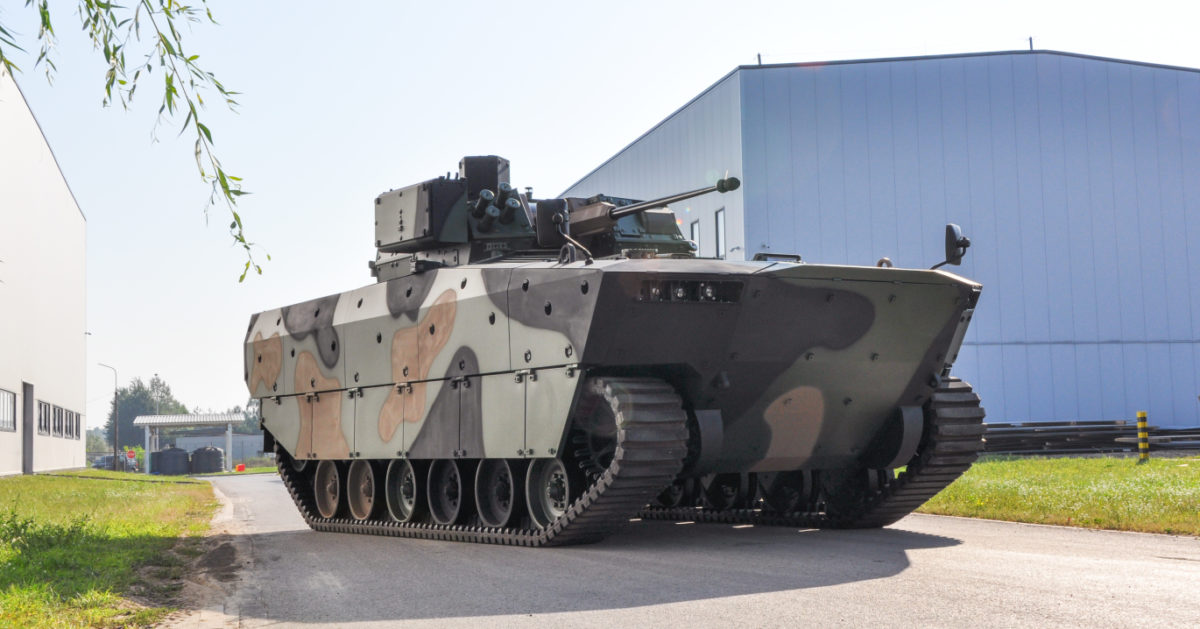 Guests visiting the 27th International Defense Industry Exhibition 2019 in Kielce could see the most modern artillery and armored weapons from Huta Stalowa Wola S.A., but also could learn about the offer for engineering troops.

Huta Stalowa Wola S.A. at the stand with the Polish Armaments Group, presented the new Amphibious Infantry Fighting Vehicle BORSUK with a Remote Controlled Tower System 30 mm, a self-propelled mortar 120 mm on a modified tracked chassis, as well as the Erratic Minelaying Vehicle BAOBAB version with four throwers. Together with PGZ and WZU, the concept of a Tank Destroyer using the reliable KRAB howitzer chassis was also presented.

The fair, with the participation of exhibitors and professionals from around the world, began on September 3 and lasted until September 6. On September 7, during the Open Days for a wider audience, you could see the Polish Armed Forces Exhibition, where, among others the KRAB cannon-howitzer, the RAK self-propelled mortar and the LANGUSTA Rocket Launcher were presented – as a result of work carried out at HSW S.A.. Huta Stalowa Wola S.A. exhibition was visited by Andrzej Duda the President of the Republic of Poland, as well as Mariusz Błaszczak, Minister of National Defense, and representatives of the General Staff and the National Security Bureau.

The New Amphibious Infantry Fighting Vehicle presented in Kielce with the implemented 30 mm Remote Controlled Tower System (with integrated PPK SPIKE), developed as part of the BORSUK program, has successfully passed static and dynamic tests as well as swimming tests. The new infantry vehicle is to overcome wide water obstacles, and also to operate in various terrain and climatic conditions. In addition, the vehicle will be characterized by high maneuverability and ease of transport. Designed to protect the crew and landing troops against fire from small arms and anti-tank grenade launchers, but also prepared to protect the crew against explosions of mines and improvised explosives will be created in several versions – from the amphibious version to the heavy armored vehicle version.

The BORSUK project is created thanks to financing obtained from the funds of the National Center for Research and Development with which HSW S.A. has concluded a contract as a consortium leader.

Mariusz Błaszczak, the Minister of National Defense began his visit at the MSPO 2019 in Kielce from becoming acquainted with the effects of over 3 years of research and development work on the New Amphibious Infantry Fighting Vehicle BORSUK. The vehicle was created as part of the work carried out by the consortium, whose leader is HSW S.A. It is currently the most modern equipment produced in the Polish arms factory.

In addition to New BORSUK, HSW S.A. has also presented a 120mm self-propelled mortar on a tracked chassis. The presented version is based on a deeply modernized chassis, in which the manufacturer used a modern hydropneumatic suspension system. The already known to the public version of the wheeled mortar produced under the “RAK” project is used in artillery units. The latest offer of HSW S.A. presented at the fair is prepared for both domestic and foreign recipients, takes into account global trends in the construction of this type of weaponry. Thus, HSW S.A. shows that it can keep up with global industry trends, modernizes and modifies its equipment to make it even better and meet customer expectations. HSW S.A. showed readiness to start production of the crawler version of the module. The 120 mm automatic tower system used in this version of the self-propelled mortar is the equipment of company fire modules is part of the equipment in the Polish Armed Forces.

The third product that HSW S.A. has presented at MSPO 2019 is the BAOBAB Erratic Minelaying Vehicle in a version with four throwers. This is the result of work on a project carried out by a consortium led by HSW S.A., which is currently implementing a slightly modernized version of Baobab at the request of the Armament Inspectorate. The presented version is a response to a very large interest in this type of minelaying system on foreign markets. In February this year field tests were carried out for an important potential customer and several more such tests are planned. Ultimately, a vehicle with six fully automatic throwers controlled from the inside of the vehicle and a more modern minelaying control system will be created.

As mentioned earlier, HSW S.A. together with PGZ and WZU, also signaled to its clients and guests of the MSPO the concept of a tank destroyer – the latest project is currently in the initial phase, but using a modern and reliable KRAB 155 mm howitzer chassis.

On the last day of the MSPO fair in Kielce, prizes were awarded for the most innovative and promising products that increase national security. The Special Distinction of the Minister of National Defense was awarded to the New Amphibious Infantry Fighting Vehicle BORSUK carried out by the consortium, led by Huta Stalowa Wola S.A.

We can proudly say that our presentation was enthusiastically received by both Polish and foreign guests. The hit of this year’s fair has undoubtedly been the New Amphibious Infantry Fighting Vehicle again.

We invite you to watch the movie with the New Amphibious Infantry Fighting Vehicle BORSUK.