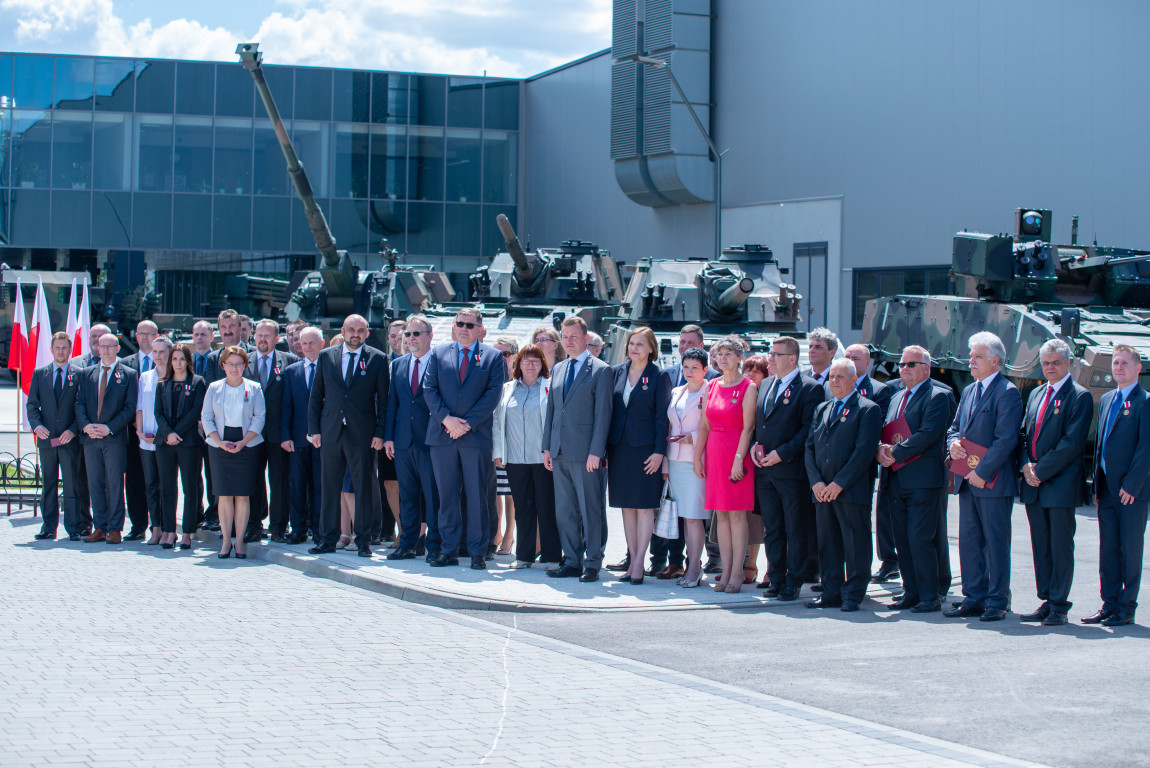 On Sunday, 20 May 2018, Mr Mariusz Błaszczak, Minister of National Defense, took part in the celebrations of the 80th anniversary of Huta Stalowa Wola and on this occasion he honored HSW employees with distinctions for services to the defense of the country. Several dozen people received Gold, Silver and Bronze Medals for the Defense of the Country, and congratulations letters from the Minister of Defense. The minister met with the employees, and then, together with the guests, he saw the weapons that were created in HSW and visited the production part of the company.

Today, Huta Stalowa Wola is primarily a company that produces great products for the Polish Army. They get the best opinions of soldiers and commanders of the Polish Army. Products that we pride ourselves on abroad. HSW is a company, a brand that is high quality. We are waiting for the next products – said Mariusz Błaszczak, Minister of National Defense during a visit to Huta Stalowa Wola. Even the weather favors the best – added the minister.

The head of the Ministry of National Defense congratulated the authorities and employees of HSW for 80 years recently achieved production and financial successes.

HSW is primarily people. Involved and deserving for the defense of Poland. Therefore, once again I have the opportunity to thank you for your work. I wish that the work would bring you satisfaction and be your pride. Thank you again for the fact that HSW is such a strong brand in Poland – Minister Mariusz Blaszczak addressed the representatives of HSW during the meeting.

The head of the Ministry of Defense reminded that HSW will take part in the implementation of the offset accompanying the purchase of the Wisła system components.

When at the end of March I signed the decision to buy a Patriot battery for the Polish Army, the products included in the HSW were also included in the offset. This is important, because it means modernity in the Polish armaments program – emphasized the minister.

Minister Mariusz Błaszczak reminded that the HSW crew played an important role in the 1980s and the activities of the opposition’s independence:

During the visit in Stalowa Wola, Minister Mariusz Błaszczak laid wreaths at the monument to the founder of the Central Industrial District, Deputy Prime Minister Eugeniusz Kwiatkowski, and at the cross commemorating the strikes in Stalowa Wola Steelworks in 1988.

The meeting in HSW was also attended by parliamentarians, as well as representatives of provincial and self-government authorities as well as Mr. Jakub Skiba President of the PGZ SA group.

President Skiba said that HSW is currently the best and best-managed enterprise in the defense industry, which achieves success and implements well the largest armaments contracts for the army. He underlined the financial and production success of HSW.

Huta Stalowa Wola is probably the best plant within the PGZ capital group. The large contracts that have been entrusted to this company are properly performed, emphasized Jakub Skiba, president of PGZ.